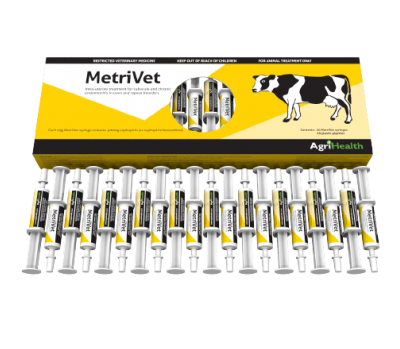 Available in cartons of 20 syringes with 20 plastic pipettes

Cephapirin is a first generation cephalosporin. It is a broad-spectrum antibiotic with bactericidal action against Gram-positive and Gram-negative bacteria through interference with cell wall synthesis. Although a betalactam antibiotic, cephapirin is resistant to the action of penicillinase. It is active in an anaerobic environment (as encountered in an infected uterus).

MetriVet is indicated for the treatment of subacute and chronic endometritis in cows (at least 14 days after parturition) caused by bacteria sensitive to cephapirin. Endometritis pathogens sensitive to cephapirin include Arcanobacterium (Actinomyces) pyogenes, Fusobacterium necrophorum and black-pigmented Gram negative anaerobes. MetriVet can also be used to treat repeat breeder cows (> 3 unsuccessful inseminations) if bacterial infection is suspected to be the cause of the fertility problem.

As aseptically as possible, introduce the contents of one MetriVet syringe into the lumen of the uterus using a disposable (plastic) or reusable (stainless steel) catheter.
1. Attach the prefilled MetriVet syringe to the catheter.
2. Introduce gloved hand into the rectum and locate and hold the cervix.
3. Pass catheter through the cervix into the lumen of the uterus. This may require gentle manipulation of the cervix to facilitate the movement of the catheter past the cervical folds.
4. Once catheter is in the uterus, inject the full contents of the MetriVet syringe into the uterus.
5. Carefully withdraw catheter.
One treatment with MetriVet is usually sufficient for a complete cure.
In animals with pyometra, pre-treat with prostaglandin (such as Cyclase A10490) to induce luteolysis and removal of debris from the uterus.
In animals that have been inseminated, MetriVet can safely be used one day following insemination.